Ivy is a character cursed as a tree. In her cursed form, she has tree-trunk colored skin and vines around her body. When you first see her, she is rooted to the ground. 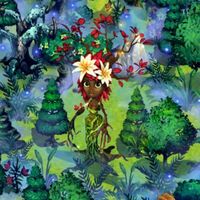 The very first questline for Ivy is to return her to human form: the Ivy the Potion Lady Questline. It begins with expanding your kingdom to reach her square. Then you free her from her roots and transform her back into a human. It ends with building her a house, Ivy's Hut.

Later, she will pop up at other times to assign quests.

She is the force behind Ivy's Magic Nursery (optional building)

Ivy occasionally gives optional quests which require you to spend Gems. The quest assigning it will have a limited-time-offer "rebate": the quest reward will give Gems to defray your cost. The quest expires after the limited time and is removed from your quest list. If you buy the item/building after the quest expires, you will pay full price.

She was chased out of her old village after rumors were spread about her being a witch, because she made potions and kept a large group of pets, including chickens and bats. Ivy enjoys games. After meeting the Baron she gets upset and asks how he could ruin them (the game he suggests is where you throw crowns on top of his head). Her potion recipes may go awry, sometimes failing and sometimes exploding in her face.

You have a choice whether to have her wander around town or stay off your display (she will still show up to give you quests.) Go to the Market menu, select Town Square, then Town Hall. Ivy, Thomas and any other "wandering" character has a checkbox for "In Kingdom." If you check it, they will stay visible, but if you turn it white they will stay hidden. Again, they will still contact you for quests and completions.

Community content is available under CC-BY-SA unless otherwise noted.
Advertisement